All living things need food. An organism’s role in an ecosystem depends on how it obtains its food because this affects how it interacts with other organisms in the ecosystem. The combination of where an organism lives (its habitat), how it obtains its food, and how it interacts with other organisms is called its niche. Plants and animals obtain food from their surroundings in two very different ways. Therefore, they have very different roles in an ecosystem.

Green plants make their own food using materials from the nonliving environment. Light energy from the Sun reaches Earth, and plant leaves absorb this energy from the Sun. Along with this energy, plants use water from the soil and carbon dioxide from the air to produce their own food. This process is called Photosynthesis. The food that plants produce is sugar and starches. Plants also produce oxygen, which is released into the environment. Humans and other animals breathe the oxygen that is produced by plants.

Organisms that can make their own food from non-living materials are called producers. Producers include plants on land and in water.

Animals cannot carry out photosynthesis. They must get their food from the living environment by eating, or consuming, other organisms. This is why animals are called consumers.

Even detrivores, however, leave behind some waste materials: parts of the dead plant and animal matter and their own waste. Bacteria and fungi break down these waste materials. Organisms that get their food energy by breaking down the final remains of living things are called decomposers. Fruit rotting on the ground, a sandwich moulding in the bottom of a locker, and a shrinking pile of seaweed on the beach are all examples of decomposers at work. 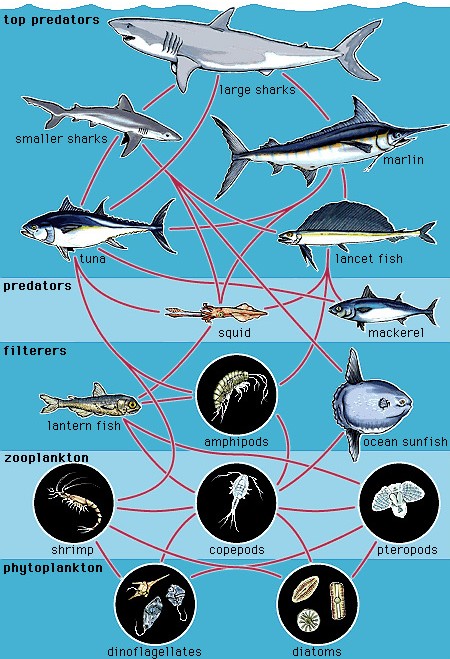 Consumers do not usually rely on only one source of food. For example, a coyote eats rabbits, but it will also eat mice, grouse and their eggs, and many other animals. The mice that the coyote eats consume the seeds, inner bark, and shoots of many different plants. Thus, most organisms are part of several food chains. A model that shows several different food chains, and the connections between them, is called a food web.

Food chains and food webs show who eats whom. They also show how energy flows through ecosystems from producers to consumers to detrivores to decomposers.

As energy flows through ecosystems, from producers to consumers to detrivores to decomposers, some energy is lost at each level.

The Sun is life’s main energy supply. Using energy from the Sun, plants make their own food through the process of photosynthesis. Plants need to use most of the energy from the food they make for everyday life processes, such as growing and producing flowers and seeds. On average, only about one-tenth ( 1 /10 or 10%) of a plant’s food energy gets stored as nutrients in the roots, leaves, and other parts of the plant. So, when a plant is eaten by a consumer, such as a deer, only one-tenth of its energy is available to the consumer.

Similarly, the deer uses most of the energy from its food (the plant) to support its everyday life functions, such as breathing, moving, and chewing. Energy is also is given off as body heat. Consequently, when the deer is eaten by a consumer, such as a cougar, only about one-tenth of its energy is available to the consumer. Thus, very little energy is passed on from one organism to the next in a food chain.

The model you made to show energy loss in a food chain is called an ecological pyramid.

The role of decomposers in recycling matter

Food chains and food webs show how matter and energy are moved from one organism to another. We often forget, however, about a very important part of this cycle: the decomposers (Figure 2). As decomposers break down their food, they use the last of the energy in the food chain. They also release nutrients. Nutrients are chemical substances that organisms need to grow and survive. Nutrients are released into the soil, water, or air. They can be taken up by plants and used again to help the plants grow. Decomposers keep matter moving between the living and non-living parts of an ecosystem.

The importance of decomposers in an ecosystem should not be underestimated based on their small size. Imagine what your schoolyard would look like with years of accumulated leaves and grass clippings still in their original forms. Without decomposers, nutrients would remain locked in the tissues of dead plants and animals. Decomposers break down matter and turn it into the nutrients that living things need every day.

If you compost your kitchen scraps or plant waste, you are relying on the work of decomposers to break down the waste and release the nutrients it contains. In a compost ecosystem, small detrivores, such as earthworms, mites, grubs, insects, and nematodes (microscopic worms), chew, digest, and mix the waste. As detrivores mix the waste, air is added to the compost mixture. Decomposers, such as bacteria and fungi (moulds), then help to break down the waste further. This makes the nutrients available to plants when you put the compost on a garden. Putting compost on a garden is like giving the soil a giant vitamin pill.