Neurons and Their Functions

The functional cells of the nervous system are highly specialized cells called neurons. These cells have a unique structure related to their function.

Structure of a Neuron

The main portion of each neuron, the cell body, contains the nucleus and other organelles typically found in cells. A distinguishing feature of the neurons, however, are the long, threadlike fibers that extend out from the cell body and carry impulses across the cell. There are two kinds of fibers: dendrites and axons.

Some axons are covered with a fatty material called myelin that insulates and protects the fiber. In the PNS, this covering is produced by special connective tissue cells called Schwann cells that wrap around the axon like a jelly roll, depositing layers of myelin . When the sheath is complete, small spaces remain between the individual cells. These tiny gaps, called nodes (originally, nodes of Ranvier), are important in speeding the conduction of nerve impulses. The outermost membranes of the Schwann cells form a thin coating known as the neurilemma. This covering is a part of the mechanism by which some peripheral nerves repair themselves when injured. Under some circumstances, damaged nerve cell fibers may regenerate by growing into the sleeve formed by the neurilemma. Cells of the brain and the spinal cord are myelinated, not by Schwann cells, but by other types of connective tissue cells. As a result, they have no neurilemma. If they are injured, the damage is permanent. Even in the peripheral nerves, however, repair is a slow and uncertain process.

Myelinated axons, because of myelin’s color, are called white fibers and are found in the white matter of the brain and spinal cord as well as in the nerve trunks in all parts of the body. The fibers and cell bodies of the gray matter are not covered with myelin.

The job of neurons in the PNS is to relay information constantly either to or from the CNS: 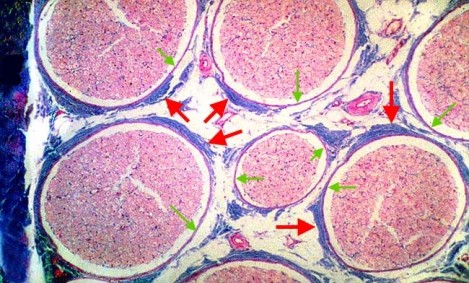 Everywhere in the nervous system, neuron fibers are collected into bundles of varying size . A bundle of fibers located within the PNS is a nerve. A similar grouping, but located within the CNS, is a tract. Tracts are located both in the brain and in the spinal cord, where they conduct impulses to and from the brain. A nerve or tract can be compared with an electric cable made up of many wires. The “wires,” the nerve cell fibers, in a nerve or tract are bound together with connective tissue, just like muscle fibers in a muscle. As in muscles, the individual fibers are organized into subdivisions called fascicles. The names of the connective tissue layers are similar to their names in muscles, but the root neur/o, meaning “nerve” is substituted for the muscle rootmy/o, as follows:

A nerve may contain all sensory fibers, all motor fibers, or a combination of both types of fibers. A few of the cranial nerves contain only sensory fibers conducting impulses toward the brain. These are described as sensory (afferent) nerves. A few of the cranial nerves contain only motor fibers conducting impulses away from the brain, and these are classified as motor (efferent) nerves.However, most of the cranial nerves and all of the spinal nerves contain both sensory and motor fibers and are referred to as mixed nerves. Note that in a mixed nerve, impulses may be traveling in two directions (toward or away from the CNS), but each individual fiber in the nerve is carrying impulses in one direction only. Think of the nerve as a large highway. Traffic may be going north and south, for example, but each car is going forward in only one direction.