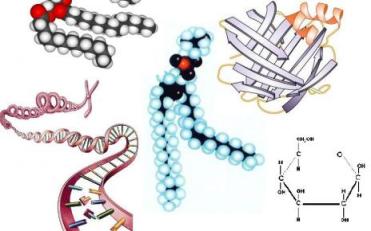 The bioelements are most abundant chemical elements in a livig being, which are not much the same ones that you can find in a rock or in the air. The top six are C, H, O, N, P, S, and they’re called primary bioelements.

The molecules that can be found in all living beings, from the simplest bacterium to the most complex animal, are called biomolecules, the molecules of Life. There are two types: 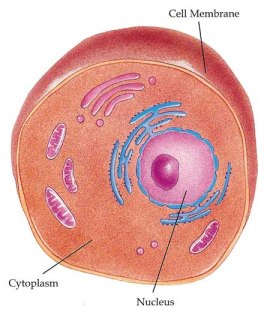 All cells are able to perform the three vital functions: (a) they reproduce, quite usually by mitosis, a process that yields two daughter cells with almost identical genetic material; (b) they interact with their environment, giving responses to specific stimuli, as when a white blood cell is able to detect and destroy a bacterium; and (c) they feed, meaning that they are able to exchange matter and energy with their environment, as when a human cell takes oxygen from the blood and releases carbon dioxide.

All the cells have (a) a cell membrane, which is the cellular envelope, (b) a cytoplasm with organelles, which are specialized cell compartments where specific functions are fulfilled, and (c) genetic material, that carries the instructions that allow both the cellular work and its self-construction. In eukaryotic cells the genetic material is inside the nucleus.

The cells of the plants can be easily distinguished from those of the animals because (a) they have a semi-rigidcell wall, made of cellulose, surrounding the cell membrane, that usually gives the cell a polyhedral shape; (b) they have one kind of organelles, called chloroplasts, where sunlight energy is used to start building their own organic substances through a chemical process called photosynthesis; (c) they use to have one or a few big vacuoles that contain sap (instead of lots of smaller ones without sap) which normally push the nucleus out to the periphery of the cell; and (d) although they have equivalent structures, they lack centrosomes, the organelles that control the arrangement of the chromosomes during mitosis in an animal cell.

The chemistry of life: the human body.You are what you eat. But do you remember munching some molybdenum or snacking on selenium? Some 60 chemical elements are found in the body, but what all of them are doing there is still unknown.

Basics of Biochemistry.The biomolecules and their roles in an easy-to-understand language.

Cells and Life processes.To understand the structure of plant and animal cells and their life processes. You can print the lesson text and read a glossary. Interactive lesson at Skoool.co.uk. (N.B.: In case your browser freezes, use Firefox and click on “Block Script” when asked).

Cell games.Excellent and easy to follow visual activity to learn the basics on animal, plant and bacterial cells.

Typical animal cell.Interactive activity to identify the parts of an animal cell and read about the function of its organelles.

Inside a cell.Take an interactive look inside an animal and a plant cell.

Membranes organize cellular complexity. Put the focus on the structure and the functions of the cell membrane.

Cell size and scale. Awesome zoomable visualization to help you get an idea of the actual sizes of cells and their components.

The evolution of the cell. The endosymbiotic theory explains how relatives of ancient bacteria ended up in modern-day cells

Cells, tissues, organs and organ systems.Great presentation on cells, their parts, their types, their sizes and how they specialise in animals and plants forming tissues and organs.

Cell structure.To learn everything you need about the parts and the organelles of a cell in an easy-to-understand language.

Cellular organization.Lots of info and images on the cells and their organelles.

List of distinct cell types in the adult human body.Article at Wikipedia containing a list of links to the corresponding articles of a great number of types of human cells.

Regrowth mystery reborn.Debunking the idea that our bodies are renewed every seven years: learn what is the real life span of several types of human cells.