Lipids constitute a broad group of naturally occurring molecules that include fats, waxes, sterols, fat-soluble vitamins (such as vitamins A, D, E, and K),monoglycerides, diglycerides, triglycerides, phospholipids, and others. The main biological functions of lipids include energy storage, as structural components of cell membranes, and as important signaling molecules.

They are compounds of C, H and O. Occasionally also N and P. 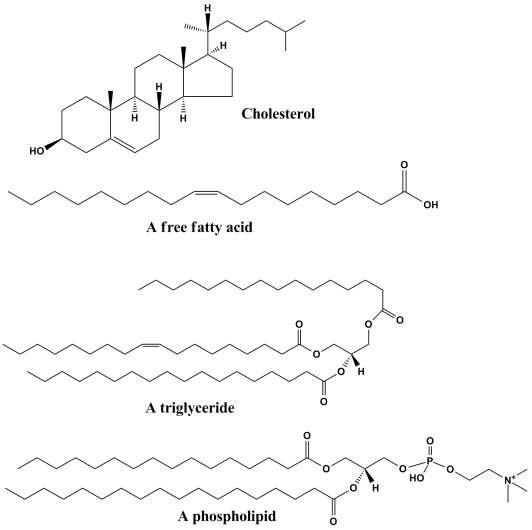 In chemistry, especially biochemistry, a fatty acid is a carboxylic acid with a long aliphatic tail (chain), which is either saturated or unsaturated. Most naturally occurring fatty acids have a chain of an even number of carbon atoms, from 4 to 28. Fatty acids are usually derived from triglycerides or phospholipids. When they are not attached to other molecules, they are known as “free” fatty acids. Fatty acids are important sources of fuel because, when metabolized, they yield large quantities of ATP. Many cell types can use either glucose or fatty acids for this purpose. In particular, heart and skeletal muscle prefer fatty acids. The brain cannot use fatty acids as a source of fuel; it relies on glucose or ketone bodies.

A triglyceride (TG, triacylglycerol, TAG, or triacylglyceride) is an ester derived from glycerol and three fatty acids.

Phospholipids are a class of lipids that are a major component of all cell membranes as they can form lipid bilayers.  The structure of the phospholipid molecule generally consists of hydrophobic tails and a hydrophilic head. It is usually found with cholesterol molecules which are found in-between the spaces of the phospholipid.

Sterol lipids, such as cholesterol and its derivatives, are an important component of membrane lipids, along with the phospholipids and sphingomyelins. The steroids, all derived from the same fused four-ring core structure, have different biological roles as hormones and signaling molecules (the estrogen family, the androgens such as testosterone and androsterone, the progestogens and the vitamin D.  Other examples of sterols are the bile acids and their conjugates, which in mammals are oxidized derivatives of cholesterol and are synthesized in the liver. The plant equivalents are the phytosterols, such as β-sitosterol, stigmasterol, and brassicasterol; the latter compound is also used as a biomarker for algal growth. The predominant sterol in fungal cell membranes is ergosterol. 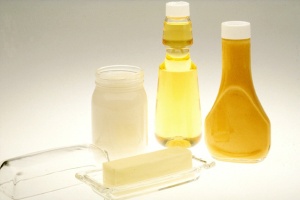 Most of the fat found in food is in the form of triglycerides, cholesterol, and phospholipids. Some dietary fat is necessary to facilitate absorption of fat-soluble vitamins (A, D, E, and K) and carotenoids. Humans and other mammals have a dietary requirement for certain essential fatty acids, such as linoleic acid (an omega-6 fatty acid) and alpha-linolenic acid (an omega-3 fatty acid) because they cannot be synthesized from simple precursors in the diet. Both of these fatty acids are 18-carbon polyunsaturated fatty acids differing in the number and position of the double bonds. Most vegetable oils are rich in linoleic acid (safflower, sunflower, and corn oils). Alpha-linolenic acid is found in the green leaves of plants, and in selected seeds, nuts, and legumes (in particular flax, rapeseed, walnut, and soy). Fish oils are particularly rich in the longer-chain omega-3 fatty acids eicosapentaenoic acid (EPA) and docosahexaenoic acid (DHA). A large number of studies have shown positive health benefits associated with consumption of omega-3 fatty acids on infant development, cancer, cardiovascular diseases, and various mental illnesses, such as depression, attention-deficit hyperactivity disorder, and dementia.

In contrast, it is now well-established that consumption of trans fats, such as those present in partially hydrogenated vegetable oils (palm oil, for example), are a risk factor for cardiovascular disease. The trans fats are present in industrial bakery, and chips.

A few studies have suggested that total dietary fat intake is linked to an increased risk of obesity and diabetes.