The auditory system is the sensory system for the sense of hearing. The auditory periphery, starting with the ear, is the first stage of the transduction of sound in a hearing organism. While not part of the nervous system, its components feed directly into the nervous system, performing mechanoeletrical transduction of sound pressure-waves into neural action potentials.

1) Outer ear. The folds of cartilage surrounding the ear canal are called the pinna. Sound waves are reflected and attenuated when they hit the pinna, and these changes provide additional information that will help the brain determine the direction from which the sounds came.

The sound waves enter the auditory canal, a deceptively simple tube. The ear canal amplifies sounds that are between 3 and 12 kHz. At the far end of the ear canal is the eardrum (or tympanic membrane), which marks the beginning of the middle ear.

2) Middle ear. Sound waves traveling through the ear canal will hit the tympanic membrane, or eardrum. This wave information travels across the air-filled middle ear cavity via a series of delicate bones: the malleus (hammer), incus (anvil) and stapes(stirrup). These ossicles act as a lever and a teletype, converting the lower-pressure eardrum sound vibrations into higher-pressure sound vibrations at another, smaller membrane called the oval (or elliptical) window. The malleus articulates with the tympanic membrane via the manubrium, where the stapes articulates with the oval window via its footplate. Higher pressure is necessary because the inner ear beyond the oval window contains liquid rather than air. The sound is not amplified uniformly across the ossicular chain. The stapedius reflex of the middle ear muscles helps protect the inner ear from damage. The middle ear still contains the sound information in wave form; it is converted to nerve impulses in the cochlea.

3) Inner ear. The inner ear consists of the cochlea and several non-auditory structures. The cochlea has three fluid-filled sections, and supports a fluid wave driven by pressure across the basilar membranes eparating two of the sections. Strikingly, one section, called the cochlear duct or scala media, contains endolymph, a fluid similar in composition to the intracellular fluid found inside cells. The organ of Corti is located in this duct on the basilar membrane, and transforms mechanical waves to electric signals in neurons. The other two sections are known as the scala tympaniand the scala vestibuli; these are located within the bony labyrinth, which is filled with fluid called perilymph, similar in composition to cerebrospinal fluid. The chemical difference between the two fluids (endolymph & perilymph) is important for the function of the inner ear due to electrical potential differences between potassium and calcium ions.

The plan view of the human cochlea (typical of all mammalian and most vertebrates) shows where specific frequencies occur along its length. The frequency is an approximately exponential function of the length of the cochlea within the Organ of Corti. In some species, such as bats and dolphins, the relationship is expanded in specific areas to support their active sonar capability. 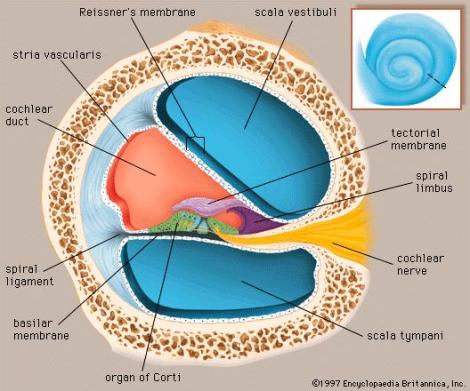 – Organ of Corti. The organ of Corti forms a ribbon of sensory epithelium which runs lengthwise down the cochlea’s entire scala media. Its hair cells transform the fluid waves into nerve signals. The journey of countless nerves begins with this first step; from here, further processing leads to a panoply of auditory reactions and sensations.

– Hair cell. Hair cells are columnar cells, each with a bundle of 100-200 specialized cilia at the top, for which they are named. There are two types of hair cells. Inner hair cells are the mechanoreceptors for hearing: they transduce the vibration of sound into electrical activity in nerve fibers, which is transmitted to the brain. Outer hair cells are a motor structure. Sound energy causes changes in the shape of these cells, which serves to amplify sound vibrations in a frequency specific manner. Lightly resting atop the longest cilia of the inner hair cells is the tectorial membrane, which moves back and forth with each cycle of sound, tilting the cilia, which is what elicits the hair cells’ electrical responses.

Inner hair cells, like the photoreceptor cells of the eye, show a graded response, instead of the spikes typical of other neurons. These graded potentials are not bound by the “all or none” properties of an action potential.

At this point, one may ask how such a wiggle of a hair bundle triggers a difference in membrane potential. The current model is that cilia are attached to one another by “tip links,” structures which link the tips of one cilium to another. Stretching and compressing, the tip links may open an ion channel and produce the receptor potential in the hair cell. Recently it has been shown that cdh23 and pchh15 are the adhesion molecules associated with these tip links. It is thought that a calcium driven motor causes a shortening of these links to regenerate tensions. This regeneration of tension allows for apprehension of prolonged auditory stimulation.

– Neurons. Afferent neurons innervate cochlear inner hair cells, at synapses where the neurotransmitter glutamate communicates signals from the hair cells to the dendrites of the primary auditory neurons.

There are far fewer inner hair cells in the cochlea than afferent nerve fibers – many auditory nerve fibers are innervated by each hair cell. The neural dendrites belong to neurons of the auditory nerve, which in turn joins the vestibular nerveto form the vestibulocochlear nerve, or cranial nerve number VIII. The region of the basilar membrane supplying the inputs to a particular afferent nerve fibre can be considered to be its receptive field.

Efferent projections from the brain to the cochlea also play a role in the perception of sound, although this is not well understood. Efferent synapses occur on outer hair cells and on afferent (towards the brain) dendrites under inner hair cells