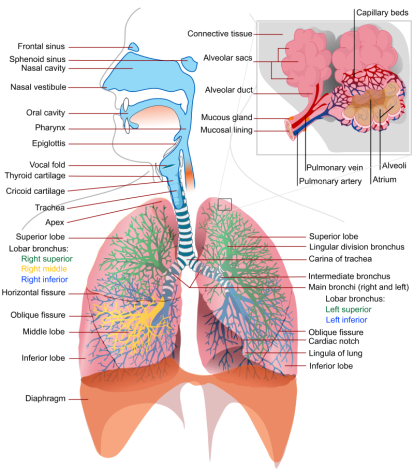 The respiratory system (or ventilatory system) is the biological system that introduces respiratory gases to the interior and performs gas exchange. In humans and other mammals, the anatomical features of the respiratory system include airways, lungs, and the respiratory muscles. Molecules of oxygen and carbon dioxide are passively exchanged, by diffusion, between the gaseous external environment and the blood. This exchange process occurs in the alveolar region of the lungs.

The human lungs are the organs of respiration in humans. Humans have two lungs, a right lung and a left lung. The right lung consists of three lobes while the left lung is slightly smaller consisting of only two lobes (the left lung has a “cardiac notch” allowing space for the heart within the chest). Together, the lungs contain approximately 2,400 kilometres (1,500 mi) of airways and 300 to 500 million alveoli, having a total surface area of about 70 square metres (750 sq ft) (8,4 x 8,4 m) in adults — roughly the same area as one side of a tennis court. Furthermore, if all of the capillaries that surround the alveoli were unwound and laid end to end, they would extend for about 992 kilometres (616 mi). Each lung weighs 1.1 kilograms (2.4 lb), therefore making the entire organ about 2.3 kilograms.

The lungs are surrounded by the rib cage. The respiratory zone is the site of gas exchange with blood.

The pleural cavity is the potential space between the parietal pleura, lining the inner wall of the thoracic cage, and the visceral pleura lining the lungs.

The lung parenchyma is strictly used to refer solely to alveolar tissue with respiratory bronchioles, alveolar ducts and terminal bronchioles. However, it often includes any form of lung tissue, also including bronchioles, bronchi, blood vessels and lung interstitium. 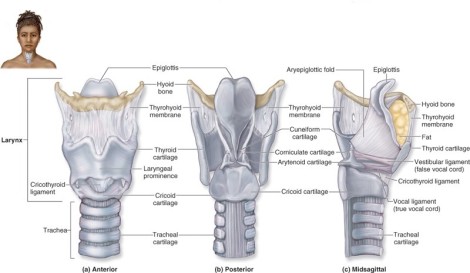 The larynx (/ˈlærɪŋks/) (plural larynges), commonly called the voice box, is an organ in the neck of amphibians, reptiles, and mammals (including humans) involved in breathing, sound production, and protecting the trachea against food aspiration. It manipulates pitch and volume. The larynx houses the vocal folds (commonly termed the “vocal cords”), which are essential for phonation. The vocal folds are situated just below where the tract of the pharynx splits into the trachea and the esophagus.

In adult humans, the larynx is found in the anterior neck at the level of the C3–C6 vertebrae. It connects the inferior part of the pharynx (hypopharynx) with the trachea. The laryngealskeleton consists of nine cartilages: three single (epiglottic, thyroid and cricoid) and three paired (arytenoid, corniculate, and cuneiform). The hyoid bone is not part of the larynx, though it is connected to it. The larynx extends vertically from the tip of the epiglottis to the inferior border of the cricoid cartilage. Its interior can be divided in supraglottis, glottis and subglottis.

In newborn infants, the larynx is initially at the level of the C2–C3 vertebrae, and is further forward and higher relative to its position in the adult body. The larynx descends as the child grows.

The trachea, or windpipe, is a tube that connects the pharynx and larynx to the lungs, allowing the passage of air. It is lined with pseudostratified ciliated columnar epithelium cells with goblet cells that produce mucus. This mucus lines the cells of the trachea to trap inhaled foreign particles that the cilia then waft upward toward the larynx and then the pharynx where it can be either swallowed into the stomach or expelled as phlegm. Despite the name, not all vertebrates have a trachea; only non-fish ones.

The trachea has an inner diameter of about 25 millimetres (1.0 in) and a length of about 10 to 16 centimetres (4 to 6 in). It commences at the lower border of the larynx, level with the sixth cervical vertebra, and bifurcates into the primary bronchi at the vertebral level of thoracic vertebra T5, or up to two vertebrae lower or higher, depending on breathing.

There are about fifteen to twenty incomplete C-shaped cartilaginous rings that reinforce the anterior and lateral sides of the trachea to protect and maintain the airway, leaving a membranous wall (pars membranacea) dorsally without cartilage. The trachealis muscle connects the ends of the incomplete rings and contracts during coughing, reducing the size of thelumen of the trachea to increase the air flow rate. The esophagus lies posteriorly to the trachea. The cartilaginous rings are incomplete to allow the trachea to collapse slightly so that food can pass down the esophagus. A flap-like epiglottis closes the opening to the larynx during swallowing to prevent swallowed matter from entering the trachea. Lined with respiratory epithelium.

A bronchus (plural bronchi, adjective bronchial) is a passage of airway in therespiratory tract that conducts air into the lungs. The bronchus branches into smaller tubes, which in turn become bronchioles. No gas exchange takes place in this part of the lungs.

The human trachea (windpipe) divides into two main bronchi (also mainstem bronchi), the left and the right, at the level of the sternal angle and of the fifth thoracic vertebra or up to two vertebrae higher or lower, depending on breathing, at the anatomical point known as the carina. The right main bronchus is wider, shorter, and more vertical than the left main bronchus. The right main bronchus subdivides into three lobar bronchi, while the left main bronchus divides into two. The lobar bronchi divide into tertiary bronchi, also known as segmentalinic bronchi, each of which supplies abronchopulmonary segment. A bronchopulmonary segment is a division of a lung separated from the rest of the lung by a connective tissue septum. This property allows a bronchopulmonary segment to be surgically removed without affecting other segments. There are ten segments per lung, but due to anatomic development, several segmental bronchi in the left lung fuse, giving rise to eight. The segmental bronchi divide into many primary bronchioles which divide into terminal bronchioles, each of which then gives rise to several respiratory bronchioles, which go on to divide into two to 11 alveolar ducts. There are five or six alveolar sacs associated with each alveolar duct. The alveolus is the basic anatomical unit of gas exchange in the lung.

The cartilage and mucous membrane of the primary bronchi are similar to those in the trachea. As the branching continues through the bronchial tree, the amount of hyaline cartilage in the walls decreases until it is absent in the bronchioles. As the cartilage decreases, the amount of smooth muscle increases. The mucous membrane also undergoes a transition from ciliated pseudostratified columnar epithelium to simplecuboidal epithelium to simple squamous epithelium.